Sure enough, this chapter picks up right where the last one left off (meaning we still haven’t shifted back to Taran’s POV). Gwystyl explains that each egg is filled with smoke that, when the shell is cracked, will come out “in considerable quantity.” He tells the companions to keep them as a gift, then tries to take his leave. Eilonwy thinks Gwystyl’s hiding more than eggs and threatens to squeeze him. He reveals that he also has mushrooms that “make a handsome puff of flame, if you should ever need such a thing.” And finally, he gives them a powder that can be used to cover their tracks or to blind an enemy for a short time. This chapter is starting to feel like we’re in Super Mario World, not Prydain. 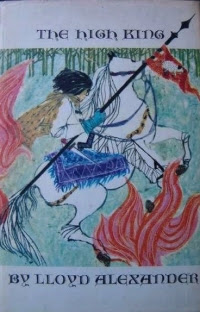 A chuffed Fflewddur immediately starts making plans to storm the castle under cloak of smoke and fire. Rhun very sensibly points out that the smoke and fire would blind them just as much as their opponents. Eilonwy agrees with him and says they need a better plan. Rhun, pumped up with pride from her validation, confidently suggests they attack the castle from different directions, with the others creating a diversion from the far wall while he rides through the gate. Eilonwy says it’s too risky and that now that he’s King of Mona he has an obligation to his people to keep himself out of the fighting and stay safe. I guess no one cares about Fflewddur’s duty to his subjects?

Near dawn, they set their plan in motion, deciding that Gwystyl will create a mushroom fire at the rear of the courtyard, and while the guards are distracted by the fire, Eilonwy and Rhun will force the gates open and Fflewddur will release the prisoners. One by one, they scale the castle wall using fishing hooks and line. Eilonwy and Rhun wait for Gwystyl’s fire signal. But then they see a fire in the Great Hall, and Magg’s warriors are headed to that fire instead of to Gwystyl’s diversion! Rhun runs off to open the gates. A bowman tries to shoot Eilonwy, so she throws a flaming mushroom at him. Then she’s off to save Taran! Even though I’ve complained about sexism in these books more than once, it’s cool that Eilonwy gets to rescue her man here instead of the other way around. It’s a pity the rest of the book isn’t told from her perspective, but alas, dear friends, we’re back to Taran’s POV in the next chapter.