You. Guys. I am thunderstruck by the unprecedented liberty that Alexander takes in this chapter: He shifts the action to Fflewddur, Eilonwy, Rhun, and Glew as they leave Avren Harbor to rejoin the rest of the party. For the first time in the series, we follow events that happen without Taran. Great Belin! Imagine if we’d known (or remembered) this was possible all along. I probably would have spent most of these recaps complaining about why we’re always stuck in Taran’s POV and never get to witness the action that takes place during his frequent lapses in consciousness. 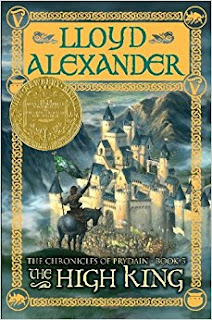 So, what happened to delay Fflewddur and company? Not much, as it turns out. A series of mundane mishaps, mostly involving Rhun’s clumsiness, caused them to miss the scheduled rendezvous with Taran and the others. They stop to camp for the night, and the next day brings them within sight of Caer Cadarn. Eilonwy notices that the castle is flying “Smoit’s jolly old bear” banner, when it should be flying the standard of the Sons of Don, since Gwydion is there. Fflewddur says that’s likely because Gwydion wants to keep a low profile. Next Eilonwy notices that the gates are shut, instead of open to greet them, and Fflewddur mansplains that that’s how things are always done on secret missions. Finally, Eilonwy points out the party of bowmen on the walls, and Fflewddur finally agrees that perhaps something might be amiss. You think? He leaves Llyan with the others and goes forward alone on foot to check things out.

When Fflewddur is not back by nightfall, Eilonwy is alarmed. Finally the bard appears in the thicket where they have taken cover. He tells them that he went into the castle as a wandering bard to sing for his supper, and learned that Magg had taken their companions captive. Eilonwy tries to think of a plan to save them, and suddenly notices someone else is lurking among the trees, watching them. It’s Gwystyl! He does his usual schtick, saying, “It’s been delightful running into you. Of course I’ll be glad to help. But perhaps another time. When we’re not feeling so upset.” Ah, Gwystyl, how I’ve missed your passive-aggressive, clinically depressed self. You’re not as much fun as Eiddileg, but you’re much less tedious than Glew.

Eilonwy wrings out of Gwystyl the knowledge that the Cauldron-Born and the Huntsmen of Annuvin are gathering in great numbers, along with the war leaders of the cantrev lords who are loyal to Arawn. He’s on his way to tell King Eiddileg what’s afoot. He tries to leave with a large bundle, but Fflewddur stops him and starts to go through its contents, revealing a bird’s nest, water flasks, some camping equipment, and a small sack full of eggs. Fflewddur gets excited about the eggs, declaring he’s hungry enough to eat one raw. Gwystyl anxiously stops him and says they aren’t really eggs, they’re smoke. It’s an odd end to the chapter, but I’d bet my bottom dollar we’ll learn more about these smoky eggs in the next chapter.