Eilonwy rescues Taran, Gurgi, Gwydion, Coll and Smoit from their captivity in the larder. She hurriedly fills them in on the uses of the mushrooms, eggs and powder, and tells them “Fflewddur’s trapped in the courtyard. Everything’s gone wrong. Our plan has failed!” I’d say she’s selling herself a little short, considering she’s just managed to free the five of them. Plus, it irritates me that no one even thanks her for this; they all just spring into action in a very manly fashion. The Eilonwy of a few books ago would have called them out on their ingratitude with a “Humph!” 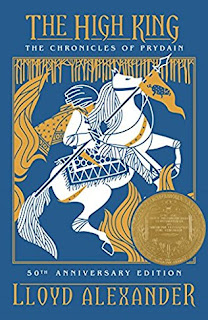 The courtyard is filled with smoke and dotted with columns of fire. Taran runs into an armed guard, but is able to blind him with a handful of powder. Smoit tries to rally his men with his war cry, “A Smoit!” Coll and Taran fight off a pack of swordsmen and save Fflewddur. Fflewddur says he doesn’t know what’s become of Rhun. The heroes fight their way to the stables, where a phalanx of warriors seems ready to finish them off for good. But suddenly, Rhun rides in on his horse, swinging his sword and shouting orders to an unseen army of bowmen and swordsmen. The ruse succeeds in confusing Magg’s warriors, and then Llyan enters the fray, allowing Smoit’s men to gain the advantage. Gwydion, Coll and Smoit pursue the retreating enemy.

Taran is heading to the stables to free Melynlas, when Eilonwy calls to him: “Rhun is badly hurt!” Rhun has been wounded by an arrow, and greets Taran for the last time, with a whispered “Hullo, hullo!” He tells Taran he’s sure that his seawall plan will work well: “And I think – I think I shall be glad to be home.” And then he dies. It’s so completely unexpected (unlike most of the good-guy deaths in the series, which are foreshadowed more heavily) that I barely have time to be sad about it … and I suspect that was exactly Alexander’s intent. Gwydion even says as much: “Arawn Death-Lord gives us little time for grief.” And you know that things have gotten serious when Gwydion is speaking for me, you guys.

The companions – including Gurgi, Gwystyl and Glew, who are all unharmed – bury Rhun. Taran vows that the seawall will be finished if he has to build it himself. After Gwystyl departs for King Eiddileg’s realm, Gwydion announces that the gathering of Arawn’s hosts are a more pressing danger than Arawn’s possession of Dyrnwyn. So, change of plans: instead of going to Annuvin, he will ride to Caer Dathyl to rally the Sons of Don. Taran asks if there’s a way to do both. Gwydion tells him going to Annuvin now will mean wasted lives and wasted time, and they need to focus on raising the largest army they can. He says he will send word to King Pryderi in the West, and asks Fflewddur to rally the Northern realms, including his own subjects (conveniently remembering that Fflewddur is a king). He then tells Taran to journey to the Free Commots and recruit as many men as he can. Gurgi, Coll and Eilonwy will go with Taran, since it’s too dangerous to send Eilonwy back to Caer Dallben.

Before dawn the next day, they all set out. Taran has a nice little moment with Aeddan, who only has a rusted sword but says he will follow Taran anywhere. I think the Taran of a few books ago would have wanted as many men in his host as he could get, so it’s a sign of his growing maturity when he tells Aeddan he should ride with his king instead. Eilonwy attaches her needlework of Hen Wen to a spear to make a banner for their little war party, and they ride out into the frosty morning. Winter is coming, y’all.