In the morning, the party splits up, with Rhun, Fflewddur, Glew, and Eilonwy detouring to the harbor: Rhun to let his shipmaster know of the change in plans, Fflewddur as a guide, Glew so Fflewddur can watch him, and Eilonwy because she’s left some things on the ship she needs to get. Fflewddur says they will catch up with the others by midday. This seems like a forced plot point to me – why don’t they all just go together, then? – and sure enough, the group fails to reach the rendezvous at the appointed time. (They clearly have not heard that you never split the party.) So, Gwydion, Taran, Coll and Gurgi continue on, and reach Caer Cadarn the following morning. 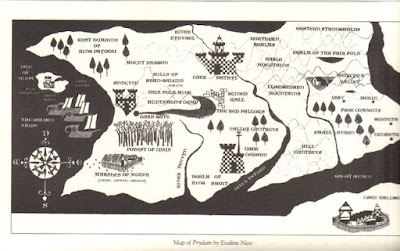 When they arrive in the Great Hall, eager to greet King Smoit, they instead see Magg on the throne! Guards disarm and restrain the companions, while Magg boasts that he now serves Arawn himself. After escaping the Castle of Llyr, he went to Annuvin and told Arawn how to regain Dyrnwyn. In gratitude, Arawn made him second in command and named him successor to his throne. Gwydion says Magg is deluded if he thinks Arawn will keep his promises. (Seriously, did Magg learn nothing from when Achren promised him the exact same thing?) Gwydion asks if Smoit is dead. Magg says no, he kept Smoit alive so that he could rally his liegemen to serve Arawn, but Smoit has proved resistant. Magg then throws the companions into the chamber where Smoit is being held, so they can reason with him: “Your lives hang on it.”

Smoit embraces them all heartily, calling Taran “the Pig-Keeper,” which seems a little formal after he was all set to adopt Taran in the last book. Smoit explains that Magg’s warriors ambushed him the day before, on his way to moderate yet another cow-stealing dispute between Goryon and Gast. Oh, those two! After Taran’s last visit, Smoit says, he walled up all of his dungeons, so the cell they are in is actually a spare larder, but unfortunately not stocked with provisions. Smoit says the two days since he’s eaten feel more like two years. Gwydion grimly says the larder may prove to be a tomb for them as well as for Fflewddur and the others, who are on their way.