In this “bottle episode” chapter, we’re whisked away to Caer Dallben, where Dallben is drowsing over the books on his table. At his feet, Hen Wen (who is allowed indoors, I guess?) starts whimpering, agitated by something that Dallben can’t hear at first. Dallben says that if their time has come, “it is a moment to pass, no more than that, whatever the outcome.” He walks out into the wintry night and tells Hen Wen he can hear about twenty riders approaching: “I do not know whether to be insulted or relieved. Only twenty?” 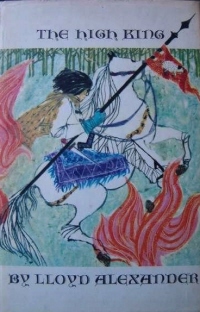 He waits quietly until the war band eventually arrives. Alexander’s writing is masterful here, as Dallben unleashes his bad-ass wizard powers the most awesomely low-key way. He exhales “as gently as if he were puffing at thistledown,” which causes a wind to rip through the forest with “the force of a thousand swords.” Then he strikes his staff on the ground, creating an earthquake. Finally, he stretches out his hand “as though he were casting pebbles into a pond,” creating ropes of flame that drive his attackers back into the forest. All but one, that is. A single man presses on, pursuing Dallben into the cottage. Dallben recognizes him as Pryderi, “King of the West Domains.”

Pryderi corrects Dallben that he’s now the ruler of all Prydain. Dallben pretends to be surprised at this news: “Is Gwydion of the House of Don no longer High King?” Pryderi scoffs and says Caer Dathyl has fallen. Dallben says it don’t make no nevermind: as long as Caer Dallben stands and Dallben lives, Arawn will never prevail. What’s more, he says, Arawn knows he can never enter Caer Dallben, nor can the Huntsmen or the Cauldron-Born; that’s why he sent Pryderi to kill Dallben for him. Pryderi bristles at this and says he serves only himself. He draws his sword and strikes at Dallben, who blocks the blow with his wooden staff. Pryderi’s sword shatters on the staff. He says scornfully that he knows Dallben’s strength and also his weakness: Dallben can use his spells to frighten and deter attackers, but not to kill them.

Pryderi reveals he has a black dagger from Annuvin that is immune to Dallben’s magic. With pity, Dallben says it’s true that Pryderi can kill him with the weapon, but that what Pryderi doesn’t realize is that Arawn has betrayed him. He’s only a pawn in Arawn’s scheme to kill Dallben, and once he’s done so, he won’t leave Caer Dallben alive: “No man has ever suffered death at my hands. But those who scorn my spells do so at their own peril.” A circle of flame surrounds the cottage, and Dallben says that as soon as Pryderi kills him, the fire will engulf them both. Pryderi doesn’t believe it, because Arawn not only wants Dallben dead, but wants Pryderi to bring back The Book of Three.

Dallben says that the book will never serve Arawn, or Pryderi: “Good cannot come from evil. You leagued yourself with Arawn for what you deemed a noble cause. Now you are a prisoner of the very evil you hoped to overcome.” He says that he’s already foreseen Pryderi’s death. Pryderi lunges for The Book of Three. As Dallben warns him not to touch it, a bolt of lightning from the book strikes him dead. Dallben bows his head, and the circle of fire quietly fades away. (This whole scene would be so amazing in a live-action film. Come on, Disney, get moving on that already!)

So… The Book of Three definitely has a protective spell on it, but when Taran touched it at the very beginning of the series, he only got some blistered fingers. Pryderi, on the other hand, is rendered quite dead. Does the book know who is grabbing it and why, and respond accordingly? Or was Taran protected by some greater magic? Discuss!