Achren says that Arawn can’t leave Annuvin in his true form, but fortunately for him, he has the ability to assume any form he wishes, such as appearing as Taran in order to entrap Gwydion. Well, that’s convenient! There’s a catch, though – when he’s in the shape of something else, he loses his power of invincibility and can be killed. Also, he hates incurring roaming charges, so most of the time he stays home.

Eilonwy says she wouldn’t have been fooled by no phony Assistant Pig-Keeper. Achren scoffs at her and says only she, Achren, can see through Arawn’s disguises. Because she taught him everything he knows, back when they used to boff, you see. Before there were any Sons of Don or Lord Gwydions or Math the High Kings, Achren ruled Annuvin with Arawn as her consort. Then, he betrayed her and stole her throne, but still she can always recognize his true colors, shining through. Achren says she bears Gwydion no ill will, and that she’ll watch over him during the night. Eilonwy is like, no, I’ll watch over him. Dallben says, chill out, you can both watch him. They take Gwydion to Dallben’s room. 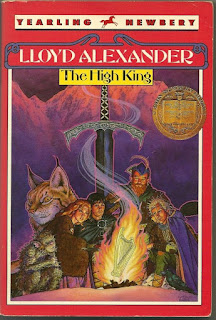 Fflewddur says he had a feeling there was something different about the fake Taran, and a harp string snaps. Rhun talks about his attempts to put up a seawall at Mona, which didn’t meet in the middle after the crews started the work at both ends. Womp womp. Glew complains about not being respected now that he’s not a giant and says he wants to go back to Mona. Taran decides that with everything going on, he won’t try proposing to Eilonwy “until all hearts were at peace again,” then he falls asleep. Later, Eilonwy wakes him and says Gwydion is up and wants to talk to them.

Gwydion, looking haggard and wolflike (drink!), says he will ride to Annuvin immediately to recover Dyrnwyn. He’s learned more about the sword, enough to know that in Arawn’s possession, “it can bring doom upon Prydain.” Eilonwy remembers the inscription on the scabbard said only one of “noble blood” could draw Dyrnwyn, and Gwydion says a closer translation would be “noble worth”: “The enchantment forbade the sword to all but those who would use it wisely and well.” Taran asks if Arawn can draw it, then, if he intends to do evil with it. Gwydion says he doesn’t know, but maybe Arawn has found a way to break the sword’s spell. Achren says she’ll go after Dyrnwyn in Gwydion’s stead, and thus have her vengeance on Arawn. But Gwydion says Achren is better off staying under Dallben’s protection, since Arawn would recognize her and kill her before she got close to the sword.

Dallben tells Coll: “Fetch the letter sticks.” YASSSS! The so-called oracular pig we’ve been hearing about for four books is finally going to prophesy something! Everyone – except for Gurgi, Glew and Achren – goes out to the pig pen to see what Hen Wen has to say. But, it’s a big letdown, because Hen Wen is cowering in the corner and won’t move. Taran scratches her chin soothingly and manages to persuade her to point reluctantly to several symbols on the letter sticks. Suddenly, the sticks shatter into pieces. Dallben says the prophesy is unfinished, and the first part of it was way dark, yo. Taran tries to calm Hen Wen down. Then, Gurgi runs out of the cottage shouting, “Wicked Queen is gone!” Oh, Achren, you minx, you!