This is it, friends – the final book in the Prydain series! The High King opens pretty much right where Taran Wanderer leaves off, with Taran and Gurgi traveling home to Caer Dallben from Commot Merin. They’ve stopped to camp for the night, when suddenly, Kaw comes swooping down to announce “Eilonwy! Princess! Home!” This is enough to make Taran and Gurgi jump up, break camp and gallop day and night – poor Melynlas and Nameless Pony! – until they arrive at Caer Dallben. 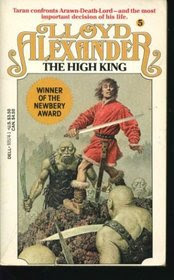 They’re greeted by Coll, Dallben, and Eilonwy, who chides Taran affectionately for not having been home to welcome her. She complains about palace life at Mona, then breaks off to observe that there is something different about Taran. He’s like, yeah, I’ve totally been a smith, a weaver and a potter since you last saw me, and he gives her the bowl he made at Annlaw’s. Eilonwy asks if he found his parents, having heard from Dallben that “you met someone you thought was your father but wasn’t.” Taran says he found what he sought, but it wasn’t what he hoped. Prince Rhun appears – “Hullo! Hullo!” – and says he’s now King Rhun, his father having passed away. As king, he decided to bring Eilonwy back to Caer Dallben, along with the former giant Glew, who is sitting by the fireside grumbling about being ignored. Taran says he wishes Fflewddur, Doli, and Gwydion were there, too. Coll says Doli sends his best – but won’t budge from the Fair Folk realm – and that Fflewddur is on his way. Dallben says Gwydion is coming as well: “He and I have matters to discuss.”

Eilonwy gives Taran an embroidered cloth with a blue-eyed pig “meant to be Hen Wen.” Taran teases her that “Hen’s eyes are really brown.” Then he gets serious and says he had hoped his quest “would prove noble, and give me the right to ask what I dared not ask before. My hope was mistaken. Yet even without it –” He’s totally about to propose, y’all! But just then, Fflewddur crashes in with a body thrown over his shoulder. It’s Prince Gwydion! At first, they think he’s dead, but it turns out he’s only mostly dead. Taran orders Gurgi to fetch Miracle Max. No, actually he says to fetch the healing herbs Adaon gave him. Wow, remember that? Then Taran apologizes to Dallben for overstepping his area of expertise. Dallben is like, I don’t have anything better than those herbs, so have at it: “I trust your skill as I see you trust it.” Aww! Taran’s all grows’d up.

Fflewddur asks Taran how he escaped from the Huntsmen of Annuvin that struck Gwydion down. Taran says, “Your words have no meaning, Fflewddur.” Fflewddur is baffled, having seen Taran with his own eyes an hour before. He says Taran cried out for help and Gwydion rode against the Huntsmen to save him, but the Huntsmen dragged Gwydion from his saddle, stole Dyrnwyn from his belt and barely left him alive. They all wonder if Fflewddur is feverish or has lost his mind, since Taran was nowhere near the battle. Then Achren enters and says that Fflewddur’s memory is fine: “You saw what was meant for you to see.” It was someone else who appeared in Taran’s form. And who has the ability to create such illusions? Only one person: her ex-boo, Arawn!