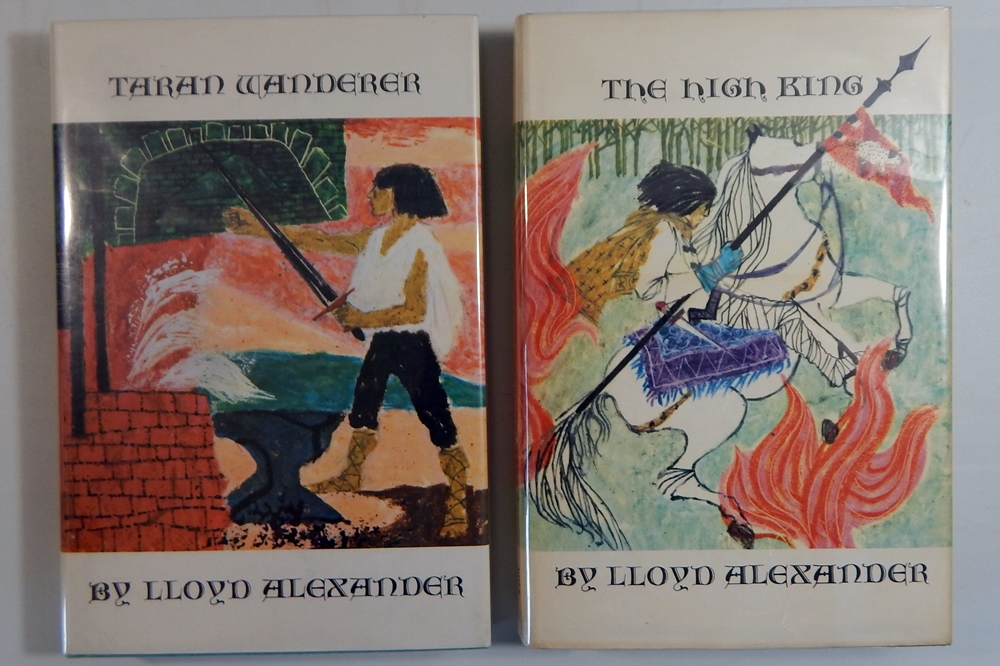 Warning: There’s really not much to make light of in this chapter. It’s packed full of pretty serious stuff, which I’m afraid will be the case for most of the remaining chapters in the story. But, like Taran, I’m committed to pressing on, so here goes!

Taran and company bear the banner of the White Pig, through snow and icy conditions, from King Smoit’s castle to the Free Commots. In Cenarth, they meet a group of Commot residents, including Hevydd the smith. Taran tells the men about Arawn’s mounting forces and asks them to give “the strength of your hands and the courage of your hearts, and, if it must be, even your lives.” Hevydd vows to support Taran, “not in obligation but in friendship,” and says he and all the other smiths in the Commots will labor to create armor for the warriors. Next, Llonio shows up, gives Taran advice on how to make weapons out of farming implements, and says his growing family will have to spare him while he follows Taran, “if there is ever to be safety in Prydain.”

They continue to travel through the Commots, amassing followers. Taran puts Eilonwy, who is armed and dressed in men’s clothing, to work tending the pack animals, and she humphs and says she’s not speaking to him. We once again meet Dwyvach, who says she will rally all the weavers in the Commots to make cloaks for the warriors, and then Llassar, who is proud to ride and fight with Taran. (This whole chapter feels very rushed, like it’s laboring to cram in all the characters who made an appearance in Taran Wanderer.)

Riding beside Coll, Taran calls him a true friend and a true warrior. Coll says that, as compliments go, he’d prefer to be called a “true grower of turnips.” He longs to be back at Caer Dallben tending the garden he left unready for winter. Taran agrees he will be glad to be an Assistant Pig-Keeper again.

Finally they arrive at Commot Merin, where, just like last time, Taran meets Annlaw pretty much immediately. Annlaw asks if Taran remembers what he learned about making pottery, and invites Taran to demonstrate his skills. Taran sits at the wheel for a little bit, forgetting his troubles like he used to, but says his focus has to be on war right now. Then Coll calls out that a band of marauders are approaching, and advises Taran to send out his bowmen, while Coll and Llassar try to draw off the attackers.

The plan works, and Taran is chuffed to have won the battle and lost none of his men … until he sees the the village, including Annlaw’s hut, in flames. He finds Annlaw dead on the floor, surrounded by his shattered wares and toppled wheel. Taran is, of course, devastated, and blames himself, saying “the blood of Merin is on my hands.” I’m not really sure how this is his fault, considering that armed ruffians were invading the Commots in the previous book, even before Taran started rallying the folk to his side? And in terms of character motivation, I think it would have been better to have Taran fighting to keep Prydain safe for Annlaw’s beautiful craftsmanship to thrive in, rather than killing off Annlaw and making it about some sort of guilt and/or revenge.

Oh well. They continue to ride, dispatching groups of warriors to Caer Dathyl ahead of them as they travel through the Eagle Mountains and eventually meet up with Fflewddur and his battle host. With them is Glew, whom Fflewddur says he felt sorry for and allowed to tag along despite his incessant complaining. Fflewddur plays his harp, and Taran is momentarily cheered, but then he remembers the deaths of Rhun and Annlaw, and clutches a shard of pottery he took from Annlaw’s hut.