Accompanied by Gurgi and Kaw, Taran heads off to Morda’s stronghold, leaving Fflewddur in the forest, along with Doli-as-frog. (Seems like Fflewddur could have just kept on carrying Doli and come with them, but whatevs.) Arriving at an impenetrable wall of thorns twice his height, Taran, after much labor with his sword, manages to carve only a small hole, through which he spies a rough dwelling made of boulders and sod. Guessing that Morda must have a secret passage through the wall of thorns, Taran sends Kaw to look for it. Dusk falls, but Kaw doesn’t return, so Taran and Gurgi decide to try climbing the wall. Nearly at the top, they spring a trap and are thrown over the barrier to the ground below, upon which Taran loses consciousness: Drink!

Taran comes to in a dimly lit chamber, and sees that Kaw and Gurgi are there as well. The bald, unblinking, creepy wizard Morda demands to know who Taran is, what he wants and if the crow belongs to him. Taran says Kaw got lost on their way to the Llawgardarn Mountains and the companions stumbled into Morda’s wall by mistake while looking for him. Morda thinks Taran is lying. Taran notices that Morda wears a crescent moon on a silver chain around his neck. It’s identical to the one Eilonwy wears, except that Morda’s has a clear, carved gem suspended between the prongs of the crescent. Taran blurts out: “The emblem of the House of Llyr!” 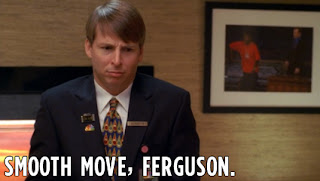 Morda’s like, oh, so you came to steal it from me? Now that the Princess Angharad is dead, he says, he alone owns the gem’s secrets. Years ago, Eilonwy’s mom – searching for her kidnapped baby daughter – came to Morda’s house and asked for shelter in return for the amulet. She was feverish and died that night. Morda kept the necklace and the apparently empty book she carried with her. Later on, he sold the book to Glew, never realizing its power.

Morda, who was born human but considers the human race beneath him, had been looking for the secret to eternal life, said to be contained in a Fair Folk treasure trove. With the help of Angharad’s gem, he was able to raise the wall of thorns and turn a Fair Folk sentry into a mole. His next move, he tells Taran in that old Bond-villain trope of revealing your entire plot to your prisoner, will be to enslave the entire realm of Fair Folk! At that moment, Fflewddur (who’s apparently no better at waiting than Taran is) crashes through the wall of thorns. Morda ties him up and drags him into the chamber as well. Fflewddur says at least Doli is safe enough, and Morda says they will all share Doli’s fate. Taran warns Morda: they are under Dallben’s protection, and Dallben will put the smack down on Morda if he harms them. Morda scoffs at this, and uses the gem to transform Fflewddur into a hare and Gurgi into a mouse. (Why not more frogs? I guess he likes variety.) Then, Morda turns “his unlidded eyes on Taran.” Creepy cliffhanger! What will Taran’s new form be? Like Orddu, I’m voting for hedgehog.