Gwydion steps out of the shadows, still in his shoemaker’s disguise, with Kaw perched on his shoulder. Rhun asks where his sandals are. Taran quickly whispers to him – like, no dude, be cool, this guy is a Prince of Don – which cracks me up. I suppose he could be whispering so that they won’t be overheard by Magg or Achren, but it totally reads like he’s whispering an aside to Rhun to keep him from embarrassing himself in front of Gwydion. And, because Gwydion is a douche, he just says that the sandals will have to wait, without bothering to introduce himself to Rhun at all or explain why he posed as a shoemaker. Then he proceeds to apologize to Fflewddur, for not revealing himself when they shared a stable together, which makes his behavior to Rhun seem even ruder. Oh, Gwydion.

Taran tells Gwydion that Magg has taken Eilonwy, most likely to Caer Colur. Gwydion already knows this, and in fact has already been to Caer Colur, but he was too late. Eilonwy is now Achren’s prisoner, guarded by a crew of “hirelings and outlaws,” but fortunately no Cauldron-Born, since Achren no longer has Arawn’s protection. Taran is all for going and attacking right now, but Gwydion says there is more to fear than swords. He leads them down to the beach, where they board a small boat that he obtained from one of Mona’s fishermen. Taran is surprised by how far away Caer Colur is, based on Glew’s descripton of it having broken off from the mainland. Gwydion is like, whoa, you met Glew? Taran hands him Eilonwy’s bauble and shows him the magic book. Gwydion can’t read the writing either, but says it’s a treasure of the House of Llyr. He exposits, “For generations the daughters of the House of Llyr were among the most skillful enchantresses in Prydain, using their powers with wisdom and kindliness.” Two of their most magical treasures were Eilonwy’s bauble, aka the Golden Pelydryn, and the book of spells that went with it.

Although Eilonwy grew up believing her kinsfolk had sent her to live with Achren to learn to be an enchantress, Gwydion explains, in reality, Achren kidnapped her. But Achren couldn’t take the Pelydryn away from Eilonwy, because it would lose its power, and with the book of spells having been lost there was nothing she could do with it anyway. The spells wouldn’t have helped Glew, even if he had the bauble to read them by, continues Gwyddie, because only a daughter of the House of Llyr who “has reached the threshold of womanhood,” as Eilonwy is about to do, can command them. (Is that a euphemism for getting her period?) Taran says that Achren won’t dare harm Eilonwy, then, and Gwydion counters that Eilonwy may be “in greater danger than before.” 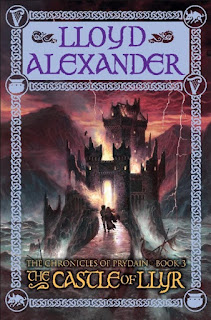 They arrive at the fortress of Caer Colur (aka the titular Castle of Llyr, y’all)! Gwydion goes ahead to check out the guards, coming back to report that they are mostly asleep. They all sneak in easily, and Kaw identifies the tower where Eilonwy is being held. Gwydion says one of them must climb up and see if they can free her, while the others stand guard. Taran turns to Rhun and says it should be him, since he’s her betrothed and all. Rhun says he no longer needs to prove his valor to Eilonwy: “I’m quite content proving it to myself.” And, he adds, Eilonwy would probably rather see Taran first.

Gwydion buries the book and the bauble under some loose stones in the courtyard, to keep them safe until they come back. (Um, wouldn’t it be smarter to have Kaw carry them somewhere else, like to the boat, perhaps?) Then he gives Kaw the end of a rope, which the crow secures to the top of the tower, and Taran climbs up. Eilonwy’s in the tower! She’s asleep on a couch. Taran wakes her, exclaiming that Gwydion, Gurgi, Fflewddur and Rhun are all with him. Eilonwy sleepily says, “That’s very interesting.… But who are they? And … who are you?”