Taran tells Fflewddur and Gurgi that when dawn comes, they should return to the search party, while Taran goes on after Rhun alone. Then he falls asleep, has scary dreams about Achren, and wakes at dawn to Fflewddur shaking him. Turns out they’re not quite so lost as they thought last night – they were just going in circles. They mount their horses, who lead them to Rhun’s mare, standing riderless next to a decrepit-looking cottage. The door opens and: “Hullo, hullo!” Rhun’s had a great night’s sleep in the abandoned hut. Taran yells at him for getting lost, and Rhun says he fell off his horse and had to go chasing after her, then, since it was getting dark, decided to spend the night in this convenient shelter. Besides, he wasn’t lost, because he’s in command. “Wherever I go, that’s where the search is, if you see what I mean.” Heh. Taran is of course furious at Rhun’s rank-dropping and almost tells him about his oath, but controls himself.

Fflewddur says he dislikes huts on the whole, thanks to Orddu, Orwen and Orgoch. This hut’s abandoned, however, with a thick layer of dust and leaves on everything. Gurgi finds sheets of parchment with writing on them, and under them is a leather-bound blank book. Rhun says he’d like to have it to write down “things I’m supposed to remember to do.” Taran gives it to him, saying, “if there’s anything that might ever help you do anything, you’re welcome to it.” What about something that helps him marry Eilonwy? Aw, too soon?

Taran is able to make out enough of the writing to discern that the pages are recipes for potions (I guess Dallben must have had him help with a few on occasion?) written by someone named Glew. The potions appear to be designed to make someone grow bigger and stronger. They spot some tiny boots in the corner and presume that Glew was “a little fellow.” Fflewddur takes over translating the notes, expositing that Glew tested his recipes on a mountain cat that he named Llyan, and that she grew so large he had to keep building bigger cages for her. The gang conjectures that Llyan must have gobbled Glew up. 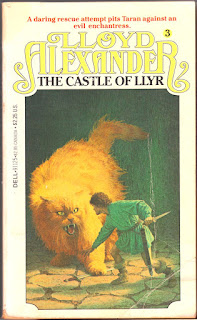 Outside the hut, the horses start panicking, and then a huge shape bursts through the door! It’s Llyan! She’s a mountain cat larger than a horse, and the lash of her tail is enough to knock Taran down. She also knocks Fflewddur over when he draws his sword, then settles herself in the doorway, refusing to let the companions retrieve their weapons or leave the hut. While trying to think of a way out, Fflewddur starts to strum his harp. Llyan stops growling, but resumes every time he stops playing. She’s a music lover! Gurgi tells Fflewddur, “Do not leave off hummings and strummings!” The bard urges the others to flee, since apparently he’s going to have to stay in the hut and play music for Llyan for the rest of his natural-born life.

OK, nitpicking time. When I first read these books as a child, I didn’t have the benefit of a pronunciation guide, so of course I read Llyan as “lion” and not as “lee-AHN.” Now that I know how it’s supposed to be pronounced, I can hear it correctly in my head (unlike Prydain, which is probably going to require hearing it in the movies to actually sink in, if it ever does). But are we supposed to believe that Taran and Fflewddur, seeing the name written down, didn’t also pronounce it “lion”? Did Glew provide a phonetic spelling alongside his potion notes? And why would he choose that spelling if not to be intentionally confusing? Also: the solid orange, fluffy feline on the cover of my paperback looks not at all like a mountain cat.