Karen Thompson Walker’s The Age of Miracles starts with a very simple premise: what if the rotation of the Earth slowed slightly so that the days and nights gradually became longer and longer? Walker tells the story through the eyes of an 11-year-old girl, Julia, who lives in California, plays piano and pines for a skateboarding loner named Seth Moreno. It’s told in retrospect, which was a good choice, because the narration isn’t limited to the sentence structure and vocabulary level of a preteen. The adult Julia is able to reflect more profoundly on her experience, and her occasional hints of what’s to come – along the lines of “had I known it would be the last time I would do this…” – build suspense. It’s a page-turning read, and I couldn’t wait to find out where it was headed. 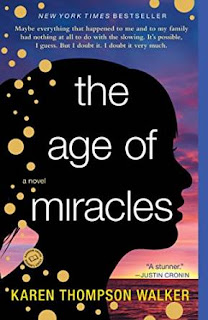 Despite the lack of a satisfying scientific or magical explanation for the phenomenon (see also Bigger Than a Bread Box), the story still satisfies emotionally. And there’s a lot to relate to in the changes that happen in Julia’s life: friendships ending and beginning, strife in her parents’ marriage, and the inevitable losses that accompany growing up, particularly at the age where some girls seem to be growing up much faster than others. But, the most interesting and believable part of the book was how the government responds to the event – by instituting “clock time,” mandating that everyone continue on the 24-hour clock even when that means going to work and school in the pitch dark or sleeping while the sun is high in the sky. (Considering that we once again are about to participate in the semiannual madness that is Daylight Saving Time, I found this to be an entirely likely scenario – its preposterousness completely within character for our society.) Those who opt out of clock time call themselves “real-timers” and retreat to hippie-like communal retreats where they honor their circadian rhythms as much as possible, even as that becomes harder and harder to do. To me, the conflict between clock-timers and real-timers felt like a metaphor for the choice we all must make every day: to live authentically and follow our own best paths through life, or to conform to the standards set by outside forces who seek to keep us all in line.