The gwythaint is young, injured and can’t free itself from the thornbush. It hisses at the companions, but is clearly helpless. Gurgi and Melyngar are nervous. Fflewddur says it’s lucky the parents aren’t around, or they would tear the companions to shreds protecting their offspring. Eilonwy says the fledgling looks like Achren, particularly “around the eyes, on days when she was in a bad temper” (or hung over, I’m thinking), and Doli pulls his axe out, intending to dispatch it. Taran, however, won’t let him, saying the creature is in pain and needs their help. Doli warns that if they help the gwythaint, it will rip them apart as soon as it’s strong enough, then fly directly to Arawn. But Taran is still high off of the peace-love-and-understanding vibe from Medwyn’s hidden valley, and says that all creatures deserve kindness and respect. He lifts the gwythaint out of the thornbush and makes a poultice for its wounds and a “healing brew” to feed it. 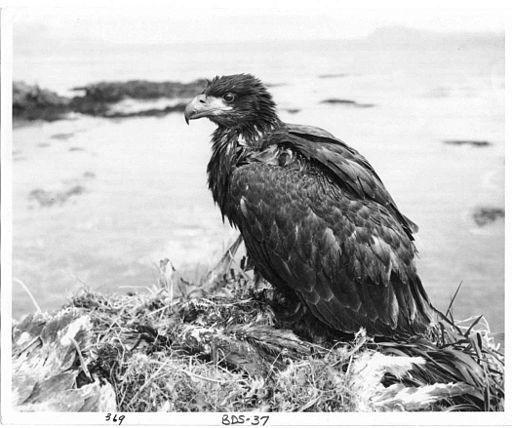 Doli is all, don’t know how you’re going to carry it, and don’t expect me to make a cage for you, humph! Taran tries to make a cage himself and fails miserably, so naturally Doli steps in and makes it the right way. They put the gwythaint in the cage and resume their march, feeding and medicating the bird each time they stop to rest. During the day it seems to become more friendly to Taran and Eilonwy, but the following morning they find it has torn through the cage and escaped. Doli says he warned them, and that the gwythaint is probably halfway to Annuvin by now: “Spare me from fools and Assistant Pig-Keepers!” Poor Taran is stricken and says he’s “done the wrong thing again, as usual.” Eilonwy says that’s probably true (hee!) but she hates when people say “I told you so.” Nonetheless, she thinks Doli isn’t nearly “as disagreeable as he pretends to be.” I feel like it’s Taran’s turn to “humph” at this.

They begin to descend toward the plains. The weather turns gray and windy. Doli goes ahead to scout, and leads them to a hill crest where they can look down onto the valley. They see the Horned King’s host, and Taran imagines that the Horned King himself is looking right at him, though he stays close to the ground and tries not to be visible. Doli says they’ve been overtaken because of the time lost when Taran tried to help the gwythaint. They arm themselves with the Fair Folk weapons; Gurgi is excited to have a small sword and be a “mighty warrior” in his own right. Hen Wen is terrified and has to be urged forward. She keeps lagging behind, so Taran and Doli finally decide she must be tied up and put on Melyngar. But they turn around to find that Hen Wen has vanished! A mournful hunting horn and the cries of a dog pack are heard from the hills: Gwyn the Hunter again. Where he rides, Fflewddur reminds us bleakly, “death rides close behind.”