The first book in the Prydain series is titled The Book of Three, but it’s not the actual Book of Three – that’s another book that shows up briefly in the story and is sort of like the Bible, or the History of the World. I think the title of Chapter 1, “The Assistant Pig-Keeper,” would have been a more appropriate title for the book, since the pig in question is the impetus for Taran’s entire quest … but maybe it didn’t sound “high fantasy” enough? Anyway, I’m getting ahead of myself. 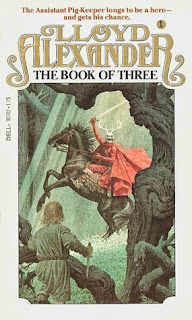 The book starts off by introducing us to Taran and Coll in the midst of a difference of opinion: “Taran wanted to make a sword; but Coll, charged with the practical side of his education, decided on horseshoes.” That’s about all we get in terms of who these characters are and what their relationship is, but there’s a physical description of Coll as stout, round and bald, so you know he’s at least middle-aged, while Taran is clearly young – how young isn’t clear, but not a grown man, as he’s still being educated and Coll is clearly the boss of him (or at least the middle manager under Dallben).

We also get a hint that Coll was something other than a farmer once, as he mentions having held a sword once or twice in his day, and quickly gets the better of Taran in their mock sword fight. Then we meet Dallben, “master of Caer Dallben,” who is 379 years old and spends most of his time “meditating,” which Alexander slyly lets us know is code for “napping.” Dallben takes Taran to his Merlin-esque chamber overflowing with relics and books (including The Book of Three!). He gives Taran – and us – a brief history of Prydain, which is a land made up of many small kingdoms, with the High King Math ruler over all. The Sons of Don have guarded Prydain “against the lurking threat of Annuvin,” the Land of the Dead, ruled by Arawn, who long ago stole many treasures from the race of men, hiding them in his stronghold. Dallben explains that Prydain has enjoyed relative peace until recently, when a new threat arose: a cruel and powerful warlord, known as the Horned King because of the antlered mask he wears to hide his face. Dallben cautions Taran to put away his fantasies of becoming a hero, because, yeah, that advice always works really well in adventure stories. Taran says he wants to be a hero like the great Prince Gwydion, a descendant of the legendary Sons of Don, but we don’t learn any more about Gwydion at this point because Dallben resumes his “meditation.”

Taran tries to touch The Book of Three and gets a kind of magical electrical shock to the fingers, our first indication of magic in the story. Dallben rouses enough to tell him to “see Coll about a lotion.” Coll takes Taran to the stable, treats his hands and, in reply to Taran’s complaints that he never gets to do or be anything interesting, bestows the title of “Assistant Pig-Keeper” on him – a job description which of course matches exactly what Taran already does, i.e. help take care of Dallben’s “oracular pig” Hen Wen, aka the book’s MacGuffin. Right on cue, Hen Wen escapes from her enclosure and vanishes into the woods, along with the farm’s bees and chickens, upset by … we know not what. Taran plunges after her, into the “dark and threatening” forest, and, with that, we’re off on an adventure, friends!

Two things that I recall particularly from my first read of this book (30 years ago!) that I was dying to know are how old Taran is and how his name is supposed to be pronounced. We’re never told his age explicitly in the books, but I think I pegged him around 12 or 13 (and of course he ages over the course of the series). My version of the books didn’t have a pronunciation guide (later editions do), so I settled on “TARE-an,” rhyming with Aaron, and that’s how I hear it in my head even today — though I now know that Alexander intended it to be TAH-ran.

That certainly sounds more British, but, as one of the popular girls suggested to OHHHN-drea in an early episode of “Beverly Hills 90210,” perhaps a little pretentious? I also have a lot of trouble with the official pronunciation of Prydain as prih-DANE, because I always thought of the “Pry” part as rhyming with “try” – to have the Y sound in rhyme, rather than rhythm. And Coll having the same vowel sound as Dallben bugs me, because why is it not spelled Dollben (or Call) then? I want it to be more like Coal or at least Cawl, not Cahl. Anyway, I’m sure more pronunciation peeves will rear their heads as I continue recapping. But the main takeaway from recapping this very first chapter, for me, is: holy oracular piggies but I love these books!