The concluding volume in Lev Grossman’s Magicians trilogy, “The Magician’s Land” is best enjoyed after re-reading “The Magicians” and “The Magician King,” since this third book jumps right into the action, expecting the reader to be familiar not only with its hero, Quentin Coldwater, but with its supporting cast of characters and where we left each of them (in various places across our world and several magical realms). I failed to brush up on my Magicians history before diving in, and as a result spent much of the book straining to remember who was who and what their relationships were to one another. (I would blame this on my advanced age, except that my 16-year-old brother confessed to having the same problem when reading the Harry Potter books too far apart.) 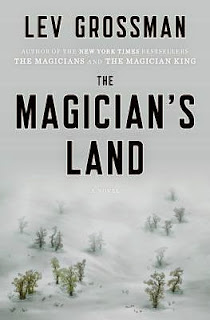 Once you know who’s who and what’s going on, The Magician’s Land is a satisfying tale with a quickly turning plot that balances sequences of action and introspection. My favorite parts were when Quentin becomes a blue whale – Grossman’s use of physical detail really makes the transformation feel believable – and the epistolary section of the novel told by Rupert Chatwin, one of the five children who appear in the Fillory novels Quentin loved as a boy. Fillory resembles Narnia in many ways but has several key differences, and I loved comparing the Chatwins’ adventures in Fillory to the Pevensies’ trips to Narnia and getting more background on their relationship with C.S. Lewis-like author Christopher Plover. The theme of authorship is very important in the world of the Magicians; there’s even a climactic scene set in a library, in which everyone’s life is represented as a book and, taken together, these books make up the universe.

I was fortunate enough to meet Lev Grossman earlier this year at Dragon Con, and when I told him about my novel and that I’m in the process of trying to find an agent, he said very seriously: “Never give up. You must not give up.” It was an exhilarating moment, and his words made a huge impression on me. Unfortunately, they lost some of their power over the last few months, and I came close to giving up anyway. Despite winning an award for my short story last month, I’ve grown increasingly frustrated with the publishing world and my lack of success at finding representation for my novel. I really need someone telling me “You must not give up” every day, and since I don’t have that, I’ll have to do it for myself. So, my New Year’s resolution for 2015 is not to give up: to write every day, even if it’s only a few words, and to stay focused on my goal of being a published author.

What resolutions are you making this year? Share them in the comments!