I recently joined a book club — a phenomenal group of women that I feel privileged to know! — and this month’s selection was “Another Brooklyn” by Jacqueline Woodson. It’s a short book and can be read very quickly, but its language is so poetic that it really ought to be savored. Since I’m fundamentally unable to take my time with things, I rushed through it once and then read it again, knowing that I had missed a lot on the first read. I think of myself as a concise writer — when writing papers for school, I always struggled to write the required number of words — but Woodson truly excels at making every word meaningful. Take, for instance, the opening line: “For a long time, my mother wasn’t dead yet.” She uses fragments with great artistry, as in the line “Memory like a bruise. Fading” and the passage that gives the novel its title: “People trying to dream themselves out. … As though there was another Brooklyn.” 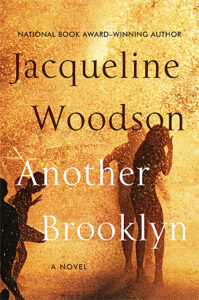 The Brooklyn of the book is the mostly black and mostly poor borough of the 1970s. The narrator, August, who is thirty-five years old in the present day, looks back on the years between 1973 and 1980, when she grew from a traumatized child of eight to a disillusioned young woman of fifteen. Her adolescence, set against the backdrop of seventies music, is mirrored by the end of the decade and the tumultuous beginning of a new era. The ghosts of the Vietnam War haunt the characters in various ways: from August’s uncle, who died in the war, to her father, who lost several fingers and his view of the world as “safe,” to returned soldiers self-medicating their post-traumatic stress with dope, sex and crime. Young August is also haunted by the Nigerian Civil War, having seen images of starving children in Biafra. She contrasts her family’s poverty with that of the Biafran people, and tries to nurture and protect her younger brother as well as the neglected children of Jennie, a prostitute that lives in her building.

But the heart of the story is in the relationship August has with her three close friends: Sylvia, Gigi, and Angela. The four girls share “the weight of growing up Girl in Brooklyn.” They protect each other from the dangers in their neighborhood — among them sexual predators, pimps and junkies — and together they feel safe and strong. All of them have dreams of getting out of Brooklyn: Sylvia as a singer (though her strict parents want her to study law instead), Gigi as an actress, and Angela as a dancer. August, lacking a clear vision of her own, latches onto Sylvia as a role model. By taking on Sylvia’s rejected pursuit of the law and confiding in Sylvia about her tentative forays into romance with her boyfriend Jerome, August hopes for reciprocation: “Give this back to me, I wanted to say to her. I want your promised future filling up the empty space ahead of me.” But “when you’re fifteen, the world collapses in a moment,” and August’s friendships fall apart, each for different reasons. In revisiting the Brooklyn of her youth, the adult August shares her story for the first time, finally achieving some sense of closure and acceptance.

With its resonant themes of seasonal change, water, music, grief and memory, “Another Brooklyn” is a book that, though set in a very specific place and time, feels universal and ageless. It’s a book that, though it can be read quickly, will stay with you for a long time.